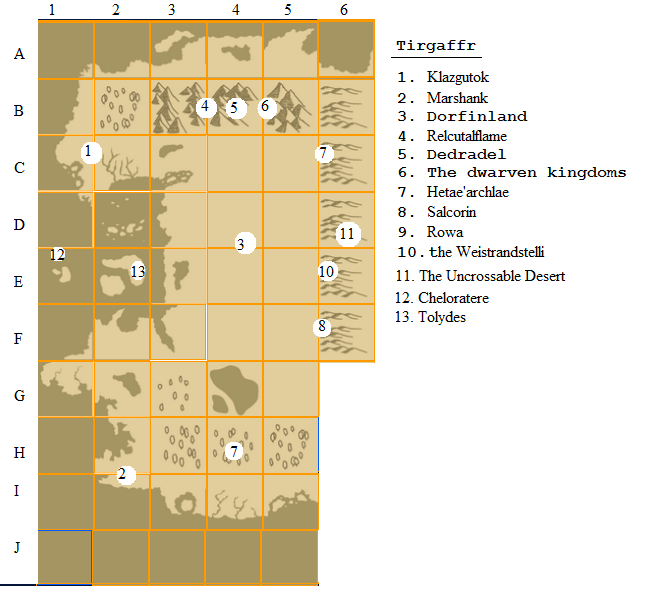 The north, south, and west sides of Tirgaffr are coastal, with some small islands nearby. At the eastern border of the known world lies the Uncrossable Desert. Sailors who have attempted to circle around it report being attacked by fearsome monsters of the sea and air. If anyone’s ever made it past the endless sands and found the other side, they’ve never come back to report on it. Every race has its own myths about what wondrous or terrible things can be found by those who persevere.

Each island has its own culture and population. In general, islanders do not mix much with the mainland – they left for their own reasons. Traders bring back wondrous magical items from distant Cheloratere, and tales of fantastic beasts from Tolydes.

Some live in harmony with the dessert. Semi-nomadic tribes of high elves live along the edge, where there are still oasis, caring for flocks of goats and cows. They call themselves the Weistrandstelli, after a long lost desert city, Weistrandstell. The friendliers sands are also the homeland of the gnomes, some of whom move frequently, but others live in sand towns which are known for their rich culture of inventing new magical trinkets. There are two gnome kingdoms, though their boarders overlap according to who you ask. Salcorin to the north, which trades much with the mountain dwarves, and more independent Rowa to the south.

Wood elves and some tieflings call the great forests home. These elves have an ancient democracy, electing a new Prime Minister of Hetae’archlae every twenty years from a pool of representatives who make the laws of the land.

The cold northern mountains are the homeland of the dwarves and most of the dragonborn. They are frequently at war with each other, as nearly every mountain is claimed as both the ancestral seat of both a great dwarven leader and a renowned dragon of times long past. Beneath it all live the Drow. All three lay claim to the same areas, but the dwarves break it up into six Kingdoms, the Dragonborn call it Relcutalflame, and the Drow call it Dedradell.

The central kingdom, Dorfinland, largest of Tirgaffr, is ruled by a human line of nobles and its population is about 75% humans. Halflings also hail from here, making about 10% of the nation. They are looked down on (literally) by many of their fellow countrymen, and tend to live in the poorer farming communities. As such a large union, the nation is rather fragmented, and the ‘minor’ nobility of various regions hold quite a lot of power on their own turf.

Orcs have a couple cities (known to be squalid) under military rule which changes as often as a thief’s allegiance. The occasional half-orc shows up in or near this area, but they’re generally considered super unpleasant by all races. There is also a small Tiefling population in the orc cities, where they make a wealthy minority. Most notable Marshank to the south-west, a swampy place made up of canals.

Ascendant campaigns can view previous versions of their pages, see what has changed (and who did it), and even restore old versions. It's like having a rewind button for your campaign.

We've already been saving your edits, so if you upgrade now you will have instant access to your previous versions. Plus, you have our no risk refund guarantee , so there's nothing to lose.

I'm sorry, but we no longer support this web browser. Please upgrade your browser or install Chrome or Firefox to enjoy the full functionality of this site.